History of Our School

In 1826, 403,000 Irish children were taught in hedge schools. Nano Nagle, who was the foundress of the Presentation Order defied the Penal Laws to open schools for children. Athenry had its own hedge school in 1898 called Watty’s hedge school which was situated at Court Lane near Dempsey’s slaughter house. The teacher’s name was Mr. Coen, uncle of the late Thomas Coen. In 1869 Athenry was said to have the best teacher in Ireland based on the 3R’s. He was a Mr. O’ Reilly, father of Essie and Tom O’Reilly, Old Church Street.

The first local school for boys and girls was built in Abbey Row in 1860 where the Ball Alley can be seen today. It was a long, four roomed one storey building. Records show that boys and girls were segregated for education at that time and the rolls for 1875 show a total enrolment of 55 boys and 35 girls. The last lay principal for the girls retired in 1907 leaving a void that required filling. In January 1908, the Archbishop of Tuam, Most Reverend John Healy, invited the Presentation Order in Tuam to set up a convent in Athenry and to provide an education for girls in the town at the urgent request of the parish priest, Canon Canton. He vacated his own house to expedite the process and this became the Sisters new convent. The first two sisters taught in the old School in Abbey row while awaiting the building of the new Girls Convent Primary School. This new schoolhouse was completed in 1910 being built on the grounds behind the Presentation Sisters Convent where our senior yard is today. In 1923 the school building was extended to accommodate a surge in enrolments.

This convent school built in 1910 had, by the mid-sixties become overcrowded and, despite various renovations down through the years, was by then inadequate for the growing numbers on roll. By 1976 negotiations for a new building were finalised between the Presentation Sisters and the Commissioners of Public Works, the site being provided by the Presentation Sisters.

Our present school was officially opened on the 4th of September 1980 with Sr. Kevin at the helm. It was named after the Sacred Heart, hence its name Scoil Chroí Naofa. The school was officially opened by Mr. Mark Killilea T.D. and was blessed by Very Reverend James Cannon Gibbons P.P. Athenry who celebrated the opening Mass. He spoke highly of the work done by all involved in bringing the project to a successful end. The school choir conducted by Sr. Carmel Fitzpatrick sang parts of the Mass and The school band trained by Sr .Vincent Canney gave the guests a rousing welcome.

1982 Painting our First Mural in SCN

As part of a pilot scheme for the promotion of Art in primary schools a unique mural was painted on the walls of our main hall by the pupils of Scoil Chroí Naofa under the direction of art teachers Miss Dervil Jordan. and Helen O’Donoghue. This project was founded by the Arts Council of Ireland as part of their “Paint on the wall” scheme. The pupils were taken on a walking tour of Athenry to select local scenes which they wanted to feature in the mural, showing life in Athenry at that time. They chose shop fronts, local houses, historic ruins, the Clarin river, churches, the cemetery and came up with a very colourful depiction of the meeting of the Galway Blazers, so much part of the Athenry scene. The children made drawings of Athenry which the artists then drew to scale on the walls of the hall. Each class was involved in creating and painting the mural which still holds today. 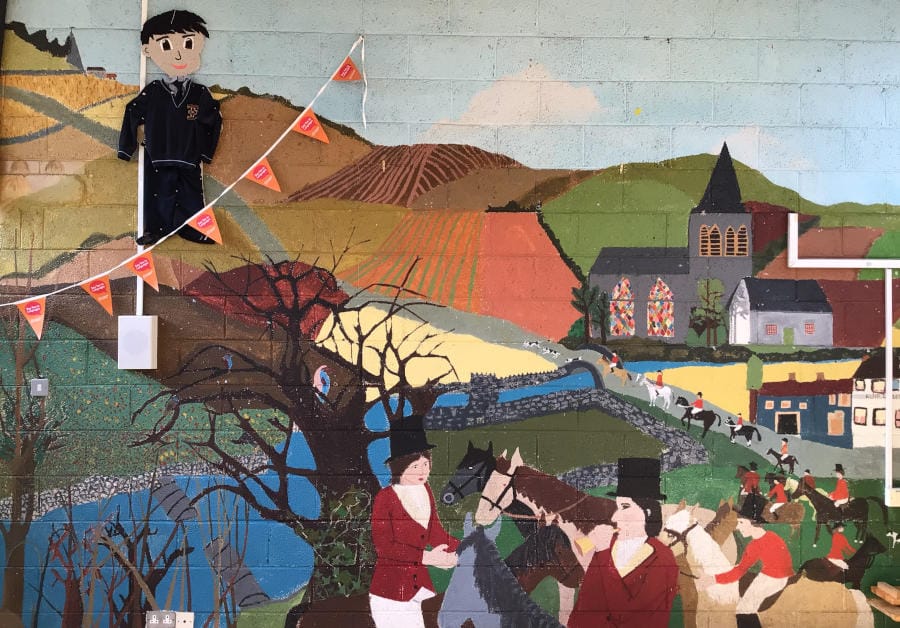 The Parents’ Council and Board of Management sponsored an art project in 2000 to celebrate the Millennium. The children of the school showed their artistic talents again in painting this mural with local artist Ruth Pokall. The mural shows Athenry in medieval times and modern Athenry, showing games, pastimes, transport, clothes and work from long ago. The children painted life in modern day Athenry and we can see the contrast in games, pastimes, transport, clothes and work to the Athenry of long ago. 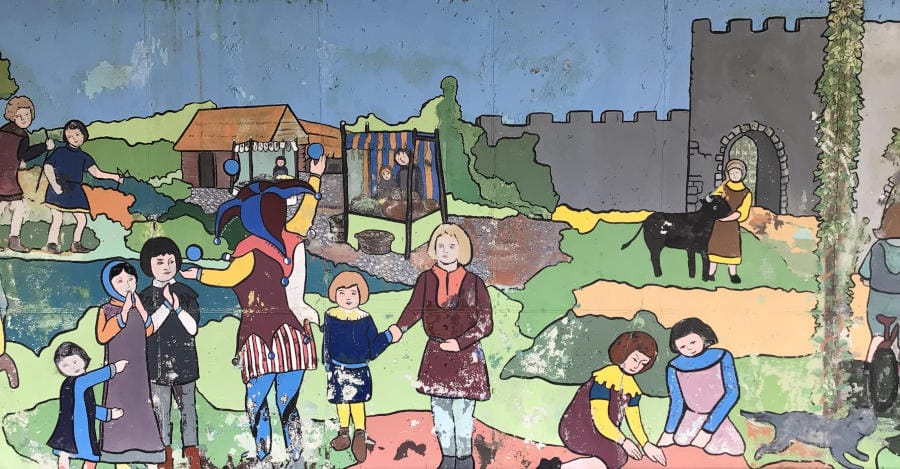 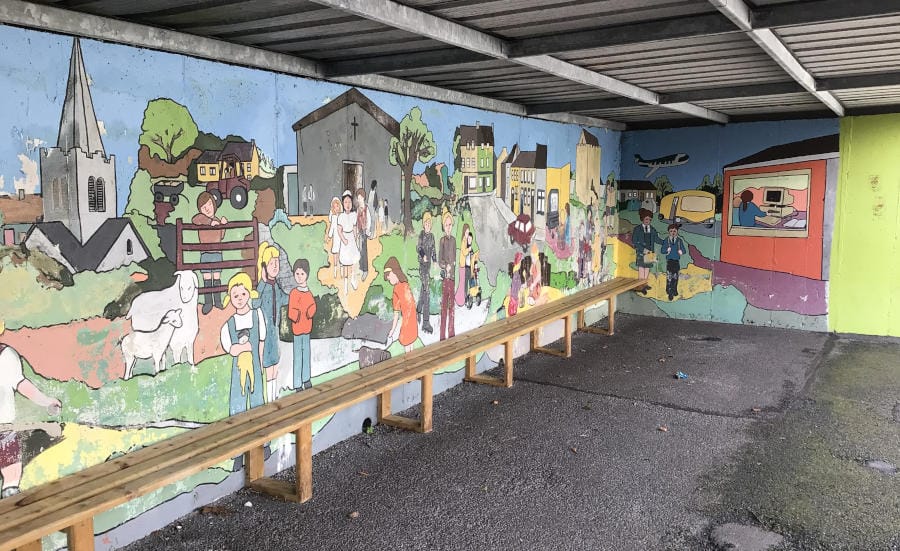 The mural in the shelter in the top yard and other playground art was painted in 2003 by Mrs Cronin, Mrs. Devally and Middy Flannery, school caretaker at the time. They painted a target game on the wall of the shelter. They also painted hopscotch games on the top and bottom yards, a footprint trail, alphabet caterpillar and numbers on the bottom yard. The art work brightens up the yard for the children at break time and makes it a fun and interesting place to play.

In June 2006 we celebrated 25 years of Scoil Chroí Naofa. We held a History Open Day. All pupils and staff were involved in the Open Day. Items from the last 25 years were collected and displayed. Photographs of the school band, sports teams and events in the school were looked at. A lot of parents, grandparents and people from the community came to look at the projects that the classes had done for History Day. Pupils led everyone on a tour of the old school.